Ok, so in light of my original plugin which was very much.....incomplete..... I am now releasing version 2.0.0 of my GameShark Plugin for anybody who wants to use it 🙂

I gave the ENTIRE plugin a massive, and very much needed overhaul;

You will now be able to use this however you please, you can either tie them to a button, or even use a RichTextBox to dump your favorite codes into and it'll all work! (hopefully)

So, the original setup is going to be the same, you will need to add the GameShark.dll as a reference to your project like this

This process is the same as it was, be sure to use the PSXConnect function or else it won't attach to the PS1 process, currently this is supported on CCAPI 2.60. the switch to 2.70 shouldn't be too difficult, but I haven't tested it.

This is still the most important part! Adding this to your Program.cs 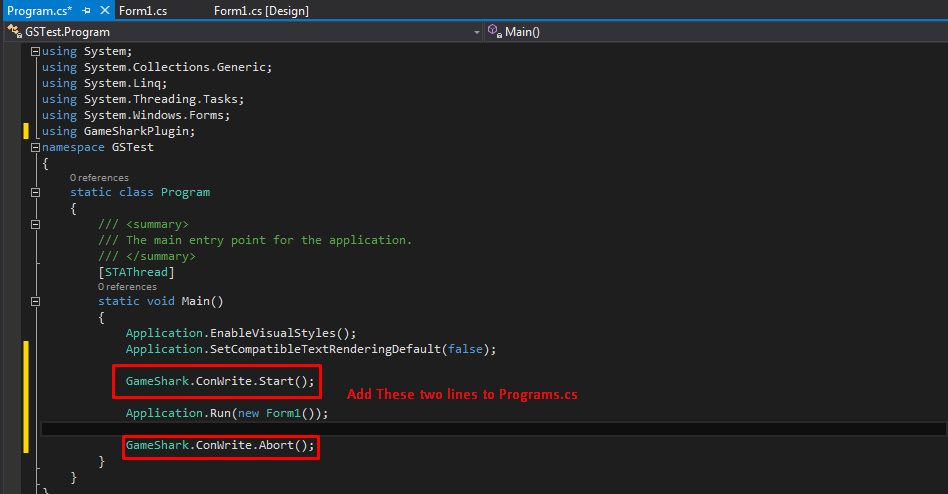 Essentially this runs the GameShark command in the background, so it's constantly running and won't bog down your program no matter how many codes you use!

As with anything there are definitely going to be bugs, and I desperately need you all (however few of you there are that use my stuff :p ) to give me much needed feedback on how to make it work better, and even more importantly bug reports to tell me what's broken.

That's literally it! You can also set it to richTextBox_TextChanged or put it on a timer. Whatever works :p

If you want to do it yourself and tweak things a bit, or just want to snag the offset for yourself, you can use the

GameShark.GSC(string GameSharkCode); function. it spits out as a uint, so you can call it using

PS3.Extension.WriteBytes(GameShark.GSC("80456789"), new byte[] {0xFF, 0xFF}); Be sure to chip off the second part of the GS Code when using that uint function or else you'll get an error. you can use a simple StringToByteArray function to convert that part to a usable byte array :p That's how I do it; by the way, that function is also included, call it like so GameShark.StringToByteArray("1234"); So, if you have a full code, you can set it up like this

[hide]
Fixing some issues,
Sorry for the trouble!
[/hide]

Reply
UGz-, Beadsman20, Nice Hack and 1 people liked
Name of the Video Game, and any other Tags
13 Replies

I might use this once I get the time. 😉

I might use this once I get the time. 😉

Thanks! Super excited to have finally gotten it working

Reply
Cain532 liked
Page 1 / 3 Next
All forum topics
Previous Topic
Next Topic
Related Topics
Name of the Video Game, and any other Tags:

RivalGamer.com (Owned by Base55 Inc) is a participant in the Amazon Services LLC Associates Program, an affiliate advertising program designed to provide a means for sites to earn advertising fees by advertising and linking to Amazon.com.
Menu